Do you know and listen to your inner voice? Do you trust it and have you developed a collegial relationship with it? Are you even aware of its existence?

I spent an overwhelming majority of my formative years being a bullied fat kid who was too gentle, kind, afraid, and compassionate to speak his mind. I turned the other cheek endlessly and just took the brunt of it all head first, silently. Whether it was me getting picked on at school, or not having much of a voice at home as the youngest child, my own voice wasn’t being heard and eventually stopped being used. It was just where the chips fell back then. I’m sure I’m not alone in that.

This continued into my teens and stayed with me into young adulthood too, unfortunately.
And when I finally had been through enough, hurt enough, been unheard enough and choked down on enough, a change was forced into play.

I certainly didn’t fight it, but I didn’t really ignite it either. It just sort of lit itself, for lack of a better analogy. A new characteristic and attribute was now on the daily menu of available tools for me. A perhaps once-dormant side of myself that was always there but long forgotten about after years of being stifled.

Something fanned a dim heat, which slowly turned cold wet ash back to warm, red coals before ultimately sparking a fire that continues to burn, glow, and grow even today.

I have since described this to people, this shift in my thinking and my reactions to things, as my “awakening”.
I have also referred to it as the discovery of my strength.
My ambition.
My true voice.
Despite how magnificent that always sounds, it was never totally accurate. It was more of a shorthand for something deeper.

I didn’t really discover anything. I dug it up, out of the deep dark hole in which it had been stuffed down. It was always there, that strength and ambition. That self awareness and that true voice. All it needed was for me to acknowledge it, understand it, and put it to use. My inner voice was there waiting for me to start listening to it and to allow it to steer me.

It’s what got me out of a town and state in which I was miserable.
It’s what told me that I had to make plans to eventually separate myself from my old survival job.
It’s what sent me on the long and arduous path of entrepreneurship.
It’s what said to me over and over again, “This isn’t you. THAT’S you!”.
It’s what got me to yank the steering wheel away from the old life I was living and abruptly go off-roading, far away from a life of complacency.

I had finally heard my collegial inner voice, and put my trust in it as I developed a relationship with it. 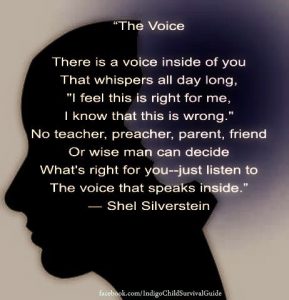 Although life is better since then, it still isn’t perfect nor will it ever be. Whereas before, I would bite my tongue in moments and scenarios where I should have been vocal and firm, now my response is almost on autopilot. I rarely find myself in situations where I walk away thinking, “Man, I really should’ve said something back there. I really should’ve spoken up.” Now I just speak up. As you might imagine, it is not always well received.

I tend to speak strongly and from a place of genuine sincerity. I don’t like to mince words or tip toe around a point. I’ve seen way too many people’s time wasted by trying to find what to say without saying what you really think.

This is especially true in a corporate environment. Your real opinion is actually badly frowned upon, as is the act of expressing it (well, at least for the companies I’ve worked for and the teams I’ve been on throughout my many long years of survival job, anyway). I watched people chase their own and each other’s tails while trying hard to look and sound professional, all while completely failing to communicate clearly and effectively to make progress with their work.

Getting it right was never as important as “saying it right”. I just never got it, I guess. Seemed counter-productive to me. Same thing with the whole “too long, didn’t read” doctrine that essentially destroys that communication opportunity, even when it is definitely NOT too long at all.

“Too long, didn’t read” translates into “your message is not important enough to my extremely limited attention span”. And oh MAN do I hate that!

That being said, …if you have gotten this far and are still reading, well then I must say a very sincere Thank You!
You’ve made my day!

I’ll never claim to be the world’s highest authority on communication, because after all, I myself am on a learning journey till the end just like everyone else. But, it is important enough to me to make sure I listen close, speak clearly, be thorough yet concise, transparent, and forward-thinking. The way I see it, if you have something you wish to convey to me in any way, then I owe you at least that much. If you are giving me your time in order to communicate a message to me, and asking for reciprocation, then you will also receive my respect and courtesy as a full participant in the communication process. That’s simply just how it works.

For many people it can be the toughest thing in the world to hear their inner voice, listen to it, trust it, and use it. For others, it can be very tough NOT to do that same thing. Tough to trust in the knowledge that your voice is right and the voices of others are wrong. Are you tough enough to go forward with only your own voice as your guide? Are you tough enough to let your true voice be heard…by YOU?

I’ll give you the answer, don’t worry.
The answer is, Yes, you are.